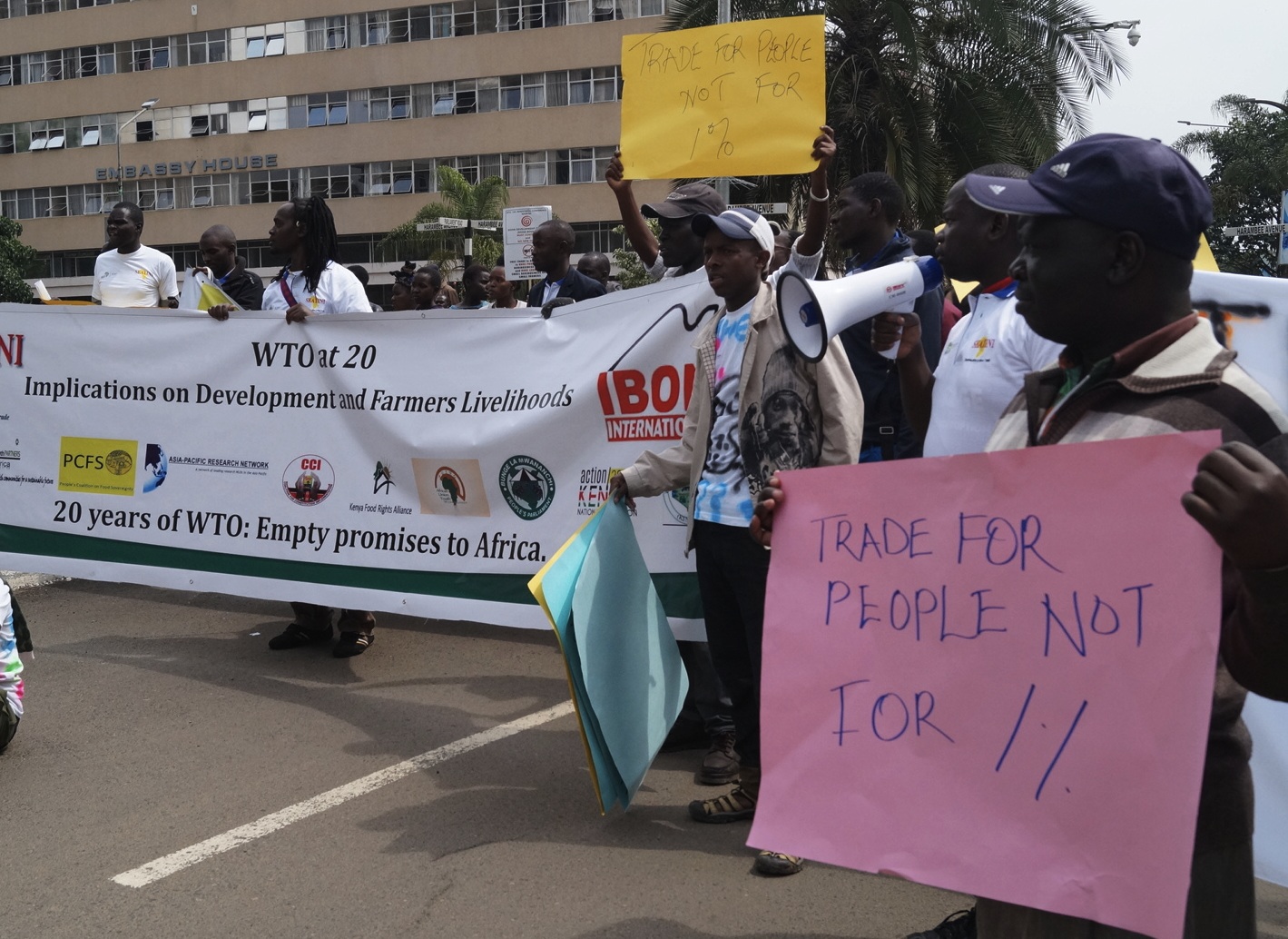 After the 21st Conference of Parties (COP21) fell short of the people’s demand for a binding climate deal that will set global warming below 1.5 degrees and compel developed countries to do their fair share, world leaders are gathering again this December in Nairobi, Kenya to negotiate another global deal. For the past five (5) days of the World Trade Organization’s 10th Ministerial Conference (MC10), developed countries are pushing for the closing of the Doha round, and urge the introduction of the new issues into the negotiations. These new issues are investment liberalization, competition policy, state-owned enterprises, government procurement, and global value chains. According to developed countries, WTO must expand to these new issues if development is to be realized. But what kind of and whose development will these new issues promote?

Two decades of WTO policies of trade liberalization, coupled by the IMF-WB-prescribed privatization and deregulation, promoted anti-development policies in Asia Pacific. They destroyed developing countries’ manufacturing and agricultural base, as well as promoted extractive industries, which involved massive environmental destruction and the release of greenhouse gases in the atmosphere. For example, WTO forced the Philippines to liberalize its mining sector, which saw the legislation of the Mining Act of 1995. This mining law handed over the control of land and resources of hundreds of hectares of Philippine lands, mostly located in indigenous people’s territories, to foreign mining corporations who are allowed to assume 100% ownership and are given generous tax holidays. Mining corporations have affected scores of indigenous peoples communities and farming communities. In the Cordillera for example, mining displaced indigenous peoples and their ancestral forestlands were cleared to give way to mining operations. Aside from polluting the land and rivers, mining corporations in the Cordillera also compete with the communities in the use of scarce water resources.

The corporate take-over of India’s agriculture was similarly strengthened when it entered the WTO. A great number of farmers shifted from food-crop production to cash-crop production, which destroyed the country’s food security, and prevented farmers from practicing agro-ecological farming that would help them adapt to climate change. Every year, thousands of farmers commit suicide because they impoverished by ruined crops due to droughts, and heavy indebtedness for the loans they incurred to purchase pricey corporate-produced seeds, fertilizers. India’s National Crime Bureau reported that 5,650 farmers killed themselves in 2014 alone.

New issues will further cement corporate control over developing economies through the WTO.
By removing government control over investments, procurement, and giving large transnational corporations equal footing with local businesses and small producers, the new issues will allow corporations to deepen their control and take over public services such as health, education, and also public utilities such as water, electricity, and transportation. The global value chains that intend to integrate the small and medium enterprises into the global market will enable corporations to further mobilize Asia Pacific’s cheap labor and cheap resources in their international production networks, without having to be accountable for providing decent and safe working conditions, living wages, and without having to implement environmental regulations.

These new issues will also open the doors wide open to harmful investments such as palm oil plantations, GMO-based cash-crop plantations, and large-scale mining which are already causing resource grabs, extrajudicial killings, and the destroying the environment in the region, devastating the very means for survival of the people in the region.

Developed countries are also aggressively pushing for these new issues in the regional free trade agreements such as the Transpacific Partnership Agreement (TPP) and the Transatlantic Trade and Investment Partnership (TTIP). These two free trade agreements also contain investor-state dispute settlement. ISDS allows corporations to sue governments if their policies are not aligned with the profit making interests of the corporations. ISDS cases have been filed against governments implementing public interest policies. For example, a fracking company is suing the government of Quebec, Canada for imposing a fracking ban, which violates the provisions under the North American Free Trade Area (NAFTA). ISDS is also present in a number of other trade agreements such as the ASEAN Comprehensive Investment Agreement (ACIA) and also the ASEAN-Australia New Zealand FTA (AANZFTA).

The expansion of the WTO to include these new issues will strengthen the current model of economic development that promotes increased green house gas emissions and the unrestrained extraction of resources especially from developing counties that will prevent the realization of genuine sustainable development.

An alternative people’s trade agenda must promote a just transition to a more equitable and sustainable development. Needless to say, trade policies must not undermine other development agreements that are crucial not just to the survival of the people and planet, but more importantly in attaining social justice. The international trade architecture must break free from the insatiable and exploitative extraction of natural resources and labor to pursue profit. Rather, we should move into a trade architecture that promotes cooperation, complementarity, and genuine solidarity rather competition. It should promote people’s rights rather than serving the narrow interests of corporations to accumulate power and profit.###