More than 1400 lives, of which 80% are civilians, have been claimed and 8,000 more were injured by the recent Israeli attacks against Palestinians in the Gaza strip. The body count is expected to rise as Israel intensifies its assaults on Hamas militants who are allegedly using unarmed civilians as cover. While the carnage continues, US President Barack Obama gave Israel a mere slap on the wrist when it called for actions “to minimize civilian casualties” while upholding the Jewish State’s right to self defense and supporting “their military efforts to make sure more rockets aren’t being fired [by Hamas].”

The US-Israeli partnership goes beyond Presidential statements. For more than six (6) decades since the Jewish State of Israel was founded, the US considered it as its prime ally in the Middle East and bestowed huge amounts assistance in the form of diplomatic, economic, and military support.

The US-Israeli military cooperation dates back to the 1940s. After World War I, Great Britainbin its effort to curb the Arab struggle for independence in its territories collaborated with the Zionists in their mission to colonize Palestine to build a Jewish State. When Great Britain and France emerged economically and military crippled from World War II, they lost grip over their territories in the Middle East and were quickly replaced by the US as the sole dominant power in the region. Washington became the strongest backer of the campaign to disposes the Palestinians of their lands to install a Jewish state by means of violence and coercion. The US government saw that the Zionist colonization of Palestine as a potential weapon against anti-imperialist strugglesand secure its interests in energy resources in the region.

During the heights of the Cold War, the US kept the Soviets out of the Mediterranean by diverting the attention of Soviet-armed Syria and Iraq towards Israel from Turkey, which had to be maintained within the American bloc. During the Arab-Israeli War in 1973, the United States implemented Operation Nickel Grass that overtly airlifted weapons to Israel. Between October 14 and November 14, 1973, the Military Airlift Command of the US Air Force flew 22, 325 tons of artillery, ammunition, supplies, and even tanks to their ally fighting against the Syria and Egypt. 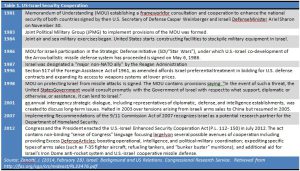 Despite limited manpower and resources, Israel’s armed force has become one of the world’s most technologically advanced militaries. It is the largest recipient of foreign military aid from the US, which cover almost a quarter of the overall Israeli defense budget.US military aid to Israel since the 1940s has amounted to around USD 70 billion. Part of the aid is being used to purchase major weapons systems from the US. Israel also enjoys the rare privilege of using a substantial portion of US aid to source locally made weapons. Thus, Israel was able to strengthen its local defense industry and became capable of exporting large quantities of arms. Currently, Israel is the 10th largest arms exporter in the world. In 2006, Israel aided its US ally against Iraq and Afghanistan by supplying it with weapons worth USD 1.1 billion. 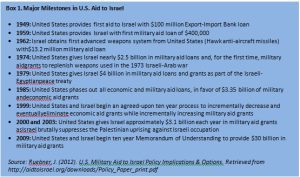 The US has three weapons transfer programs to channel USD 18.87 billion worth of weapons, ammunition rounds and related equipment to Israel between 2000-2009. These programs are the Foreign Military Sales (FMS), Direct Commercial Sales (DCS), and Excess Defense Articles (EDA), through which the US Defense Department supplied Israel weapons and military equipment numbering to 670 million. The US provided Israel 500 different categories of weapons, which include items like tear gas canisters, ammunition, high power rifles, military vehicles, and 93 F-16D fighter jets.

In 2007, the Bush Administration and the Israeli government signed a Memorandum of Understanding for a 10-year (2009 – 2018) USD 30 billion military aid budget. The MOU still provides Israel the exemption of spending more than a quarter of US military aid (26.3%) on its own domestic weapons industry while all other recipients of US military aid are required to spend it only on weapons and materials manufactured by US corporations. The US also gives another $504 million to fund research, development, and production of Israel’s Iron Dome anti-rocket system ($235 million), the David’s Sling ($149.7 million), the Arrow improvement program (or Arrow II, $44.3 million), and Arrow III ($74.7 million) (see Box 2. US-Israel Defense Projects).

Aside from military aid, the US provides economic assistance to Israel, which amounts to around USD 30 billion since the 1940s. Loan guarantees are also provided to help Israel borrow from other sources at lower interest rates. USD 10 billion in loan guarantees was approved by the Congress to assist Israel absorb the mass of immigrants coming from Russia and other Eastern bloc countries after the collapse of the Soviet Union in 1991.

The US helped finance the resettlement of European Jews, who survived the Nazi’s anti-semitic purges, in the lands of Palestine through its immigration aid. This provided the Zionists thousands of Jews to reinforce its movement for a Jewish state, and also to prevent Jewish immigrants from resettling in non-Nazi Europe and US soil. The Migration and Refugee Assistance grant has reached USD 1.7 billion since the 1940s.

Partnerships in business and science were also inked between the two countries.Leading US companies such as the IBM, Intel, General Electric, Imation, Microsoft, and Texas Instruments invest in Israel and have set up technology incubators. Likewise, Israeli start-ups partner with US companies in developing software applications such as instant messaging, internet telephony and data mining.

US Aid to Palestine

In total, Israel received more than USD 123 billion from the US since 1949 until 2014. In contrast, Palestine received only around USD 5 billion from the US since the 1990s. In 2013,total US aid to Palestine amounted to USD 426.7 million. This is less than a quarter (roughly 15%) of what Israel received in military aid alone from the US in the same year (USD 3.1 billion). This aid is also rife with conditionalities, including withholding aid if it will be used to support Hamas and the Palestine Liberation Organization (PLO),and if Palestine will seek membership in the United Nations and in other UN Specialized agencies.

In November 2012 during a similar conflict in Gaza, the US showed staunch support for its ally when it voted against Palestinian Statehood along with Israel and 7 other countries, while 138 other countries voted yes. To punish Palestine, the US withheld aid amounting to USD 295. 7 million. Israel acted in the same fashion, withholding around USD 100 million in taxes that it is supposed to remit to Palestine. This resulted into a public deficit so huge that the Palestinian Authority (PA) cannot pay the salaries of public sector workers. New threats of withholding aid to Palestine were made by Congress in April 2014 after Palestine signified its intent to sign on to 15 UN affiliated bodies.[1] Again, Israelwithheld USD 100 million worth of taxes, a move to which US called “unfortunate.” 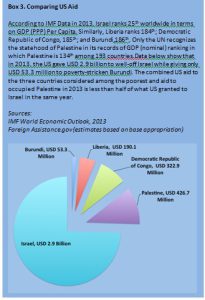 The massive amount of aid provided by the US makes it fully complicit and responsible for Israel’s genocide in Gaza. Since the 1940’s, the US has stood by its ally to secure their mutual interests in the region, which include keeping energy resources in Middle East open to access by corporations based in the US and other Western countries. Israel as the US military outpost in the region has served as a potent threat to neighboring oil-producing countries to toe the line drawn by US policies.The attacks in Gaza are directly related to Israel’s desire to control the gas fields in Palestine’s marine territory to avert an impending energy crisis. United Kingdom’s British Gas and US Company Noble Gas have already lined up to invest in the gas field.[2]

The US-Israel partnership is made stronger through the passing of the US Senate legislation to provide emergency funds amounting USD 225 million for Israel’s Iron Dome. Additionally, the US Senate Resolution 498 condemns unprovoked rocket fire and calls on Hamas to stop all rocket attacks on Israel.Recently, the US clearly stood against human rights when it solely voted against the proposal to establish an inquiry into Israel’s Gaza offensive by the UN Human Rights Council.

People’s movements and civil society around the world should condemn and continue exposing the US-Israel partnership in the genocide of the Palestinians. The international community should pressure the US to withdraw its military aid and projects from Israel and recognize Palestine’s right to freedom and self-determination. ###

_______. (2011, May 14). The Geopolitics of Israel: Biblical and Modern. Stratfor Global Intelligence. Retrieved from http://www.stratfor.com/analysis/geopolitics-israel-biblical-and-modern#axzz37ykz6oxY

Eisenstadt, M. & Pollock, D. (2012, November 7). Friends with Benefits: Why the U.S.-Israeli Alliance Is Good for America. The Washington Institute. Retrieved from http://www.washingtoninstitute.org/policy-analysis/view/friends-with-benefits-why-the-u.s.-israeli-alliance-is-good-for-america