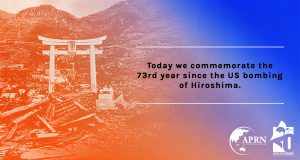 Today we commemorate the 73rd year since the bombing of Hiroshima on August 6, 1945. The death toll in the first hours after the bomb was dropped is estimated at 75,000 to 80,000. Many of those who survived the immediate blast died shortly afterwards from fatal burns and other serious complications caused by radiation. This increased the death toll to 140,000 by December 1945, and to more than 200,000 by the end of 1950. These deaths overwhelmingly belong to the civilian population which largely inhabit the city, which is a residential and business center. A few days later, US dropped another bombed in Nagasaki, killing an estimated 80,000.

The necessity of the Hiroshima bombing to the Japanese surrender is still persistently argued by the US Government. But investigation of all the facts, supported by testimonies from both camps belies this claim and reveals that by the time the bomb was ready for use, Japan was already planning to surrender. General Dwight Eisenhower said in 1963, “Japan was at that very moment seeking some way to surrender with minimum loss of face. It was not necessary to hit them with that awful thing.” While Admiral William Leahy, Pres. Harry Truman’s chief military advisor during the bombing, wrote: “It is my opinion that the use of this barbarous weapon at Hiroshima and Nagasaki was of no material assistance in our war against Japan. The Japanese were already defeated and ready to surrender because of the effective sea blockade and the successful bombing with conventional weapons.”

To this day the United States government and its allies continue their abhorrent practice of bombing civilians in its endless “war on terror” in West Asia and elsewhere. Monitoring group Airwars says at least 5,961 civilians have been killed by bombings since the war against ISIS started in 2014. The US-led military coalition in the region puts their estimate in more conservtive levels reporting only 1,790 potential civilian casualties that resulted from the more than 28,000 air strikes that it launched.