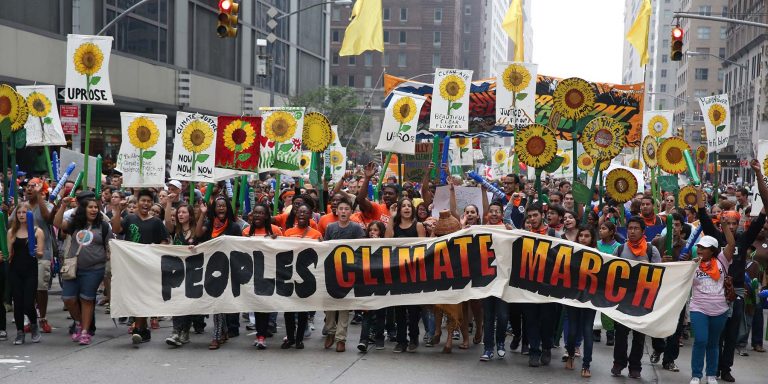 The case of the NASA scientists and three other protesters arrested for staging a protest in front of Chase Bank last April 6, is a concrete manifestation that climate activists are increasingly facing repression. Instead of taking accountability for this ecological catastrophe, advanced capitalist countries continue to intimidate, threaten, harass, and worse, kill environmental defenders and activists that fight for climate justice and demand political support.

Climate change is not just about the mere long-term shifts in temperatures and weather patterns but also the destruction of the environment for the benefit of big businesses and rich capitalist nations. Due to the ruthless plunder of natural resources and exploitation of human labor, the people are forced to bear-the-brunt of the maladies of climate change. People across borders, class, gender, and race suffer the adverse effects of environmental degradation. While, those who heavily contribute to its destruction are left unscathed and continue to amass wealth.. As a matter of fact, underdeveloped countries bear about 80% of damages to the environment due to the inexorable plunder of the planet and massive greenhouse gas emissions by advanced capitalist countries and transnational corporations.

The most vulnerable populations of these underdeveloped countries are disproportionately affected by the systemic destruction of the environment. While catastrophes continue to happen, concrete policies to mitigate its impacts are lacking. Cooperation between nation states in various policy arenas remains tokenistic, and serves only the interest of powerful countries and industries responsible for excessive extraction of natural resources and exploitation of labor.

Corporate players continue to dominate intergovernmental policy-making procedures deliberately excluding the voices of the people directly affected by natural, social, and economic disasters. The major plunderers of the environment are able to get away from their crimes against humanity while the rest of the world are left to suffer and fend for themselves.

The severity of this catastrophe demands concrete and immediate action by governments and state actors. Current development paradigms continue to operate at the expense of the Earth’s ecosystem which is now pushed way beyond its limit. The recent scientific consensus is that the rise of global temperatures to 1.5C is now “almost inevitable” while the climate breakdown will become “irreversible.” Worse, it has intensified hunger, poverty and inequality. Ultimately, our concept of development has already created lasting damage to the environment and to be endured by generations to come.

This Earth Day 2022, we are reminded that we must collectively resist and support all efforts and campaigns against the climate crisis and forward genuine solutions to overcome climate change impact. Governments of capitalist countries and mega-corporations should be held accountable for their centuries of destruction of the environment in order to feed an economic system that serves the interest of the ruling class.

True to our mandate to raise capacity in advocacy and education, and develop cooperation among people’s movements and CSOs of the region on current development issues, we stand in solidarity with those who relentlessly fight for our one planet.

We will continue to make governments and corporate polluters accountable for the crisis and challenge their insatiable thirst for profit. Again, this is the very system that brought us to this climate crisis. The fight for climate justice is not just a fight against the adverse effects of climate change but a fight for peasants, workers, other vulnerable sectors and for future generations.#