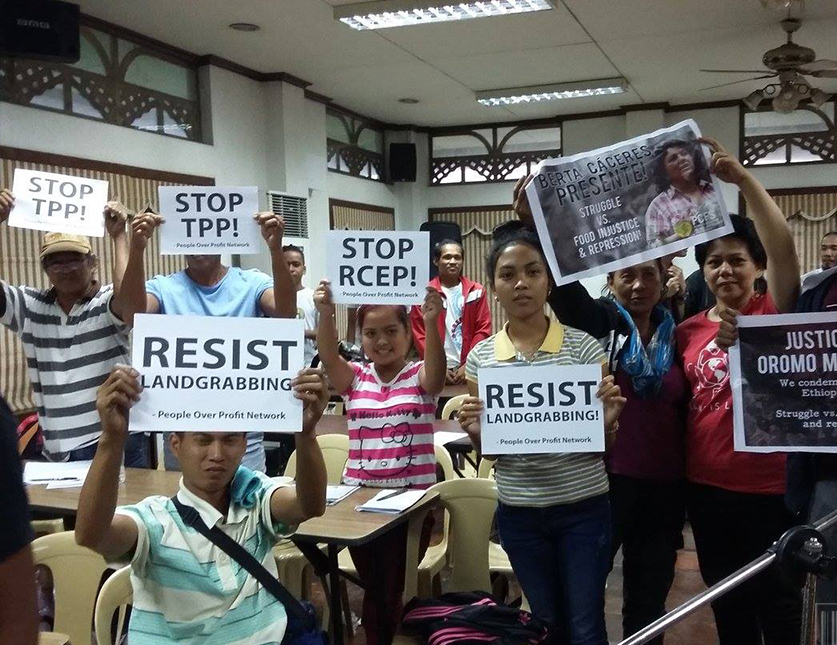 APRN statement on the RCEP Ministerial meeting in Cebu, Philippines on 3-4 November 2016

Trade ministers of the 16-nation Regional Comprehensive Economic Partnership (RCEP) are set to meet on November 3-4 in Cebu, Philippines aiming to resolve roadblocks to the negotiations.[1] The RCEP ministerial meeting is happening at the heels of the 15th round of negotiations held last October 17- 21 in Tianjin, China wherein talks revolved around market access negotiations on trade in services, goods, and investment.[2]

RCEP negotiations continue to be shrouded in secrecy – with negotiation rounds and side-meetings happening unannounced and without allowing peoples participation during the talks. Last October 25, India’s Commerce and Industry Minister Nirmala Sitharaman announced that “there is going to be a ministerial meeting early November in the Philippines,” to iron out issues including the proposed single-tier system of tariff reduction. Despite not being an official negotiation round, the Cebu ministerial will include all contentious topics in RCEP – effectively meant to push the negotiations to a close by the end of 2016.

The Asia Pacific Research Network (APRN) strongly opposes RCEP and any move to railroad its conclusion. Civil society groups across Asia Pacific have rightly and repeatedly pointed out the devastating impacts RCEP will unleash once it comes into force. Often referred to as a ‘trade’ pact, the RCEP will deal with more than just trade – giving rich countries and their corporations excessive powers so as to sue governments and delve into non-trade issues all of which have far-reaching implications across sectors and communities in the region.

RCEP and the Philippines

Once RCEP comes into force, the reduction of trade barriers among member economies is expected to result in a 2.2 percent increase in total exports among RCEP member economies.[3] It must be noted however that this expected increase in export growth is lopsidedly in favor of rich industrialized and emerging economies known as the “+6” countries (Japan, South Korea, Australia, New Zealand and India). Export volume from the “+6” countries are expected to rise up to 3.68 percent by 2023 while ASEAN states’ export volumes will become stunted at 2.21 percent as they absorb increasing imports from more developed economies.[4]

RCEP will entail a devastating blow for the Philippine economy and its people. Despite predictions of higher GDP growth rates by 2023[5], the backward agricultural system in the countryside especially for domestic rice production will suffer greatly due to the deluge of cheaper imported rice from Australia, New Zealand and Japan. Proponents of RCEP cite projections that the influx of cheap imported rice and other products will benefit poorer households, but what’s missing in the picture is the widespread joblessness and landlessness that comes after local production systems are destroyed by the domination of highly subsidized imports from rich industrialized economies.

RCEP is expected to bring in an additional USD 2.4 billion in foreign direct investments (FDIs) into the Philippines within a ten-year period[6] – an estimate that is often used to justify how the China-led trade deal will lead to more homegrown jobs. However, looking at the current USD 5 million worth of FDIs approved in the Philippines for 2015, only around 169,075 jobs are expected to be generated from the current host of FDIs – a far cry from the 2.2 million unemployed Filipinos as of October 2015[7].

The Philippine labor export policy will find a more solid grounding as the RCEP seeks to facilitate an ever-increasing supply of cheap labor force for export. Meanwhile, job opportunities in the Philippines will become scarcer as wages continue to depress and labor standards decline in the name of attracting a greater inflow of foreign direct investments.

The increase in cheaper textile imports from neighboring economies will damage the thriving local textile production in the country. Several billion dollars of investments and loans from China are bound to facilitate greater land grabbing, the expansion of plantations and factories to supply China’s burgeoning market. Inevitably, RCEP’s adoption of the infamous corporate tribunals will allow foreign corporations to sue the government over sanctions and policies that threaten their profits. The use of ‘investment defense forces’ to protect investor interests will intensify as foreign corporations find more reasons to ravage and exploit the resource-rich lands of indigenous and Moro peoples.

Without substantial changes in the Philippine economy especially genuine land reform and the push to build its own national industries, enforcing RCEP in the Philippines becomes no different than the impacts of other new generation free trade and investment agreements (FTAs). While Philippine President Rodrigo Duterte’s attempts to build better relations with China signals a welcome step to veer away from decades of US domination and control, an independent Philippine foreign policy will not prosper in conditions of economic subjugation from one superpower to another. It is imperative that closer relations with China or any other country be premised on solidarity, mutual benefit, peaceful co-existence and cooperation. In the interest of ensuring that the people are not disadvantaged in trade deals such as RCEP, we call on peoples organizations across Asia Pacific to intensify our collective resistance against RCEP and other FTAs in the offing.

[3] Philippine Institute for Development Studies. Policy Notes Issue No. 2015-23, November 2015. Will the Philippines benefit from the Regional Comprehensive Economic Partnership? Retrieved from: http://dirp3.pids.gov.ph/websitecms/CDN/PUBLICATIONS/pidspn1523_fnl.pdf

[6] Philippine Institute for Development Studies. 2015. RCEP is beneficial to the poor – PIDS study. Retrieved from: http://www.pids.gov.ph/pressrelease?pr=253

APRN Condemns Attacks Against Activists in the Philippines