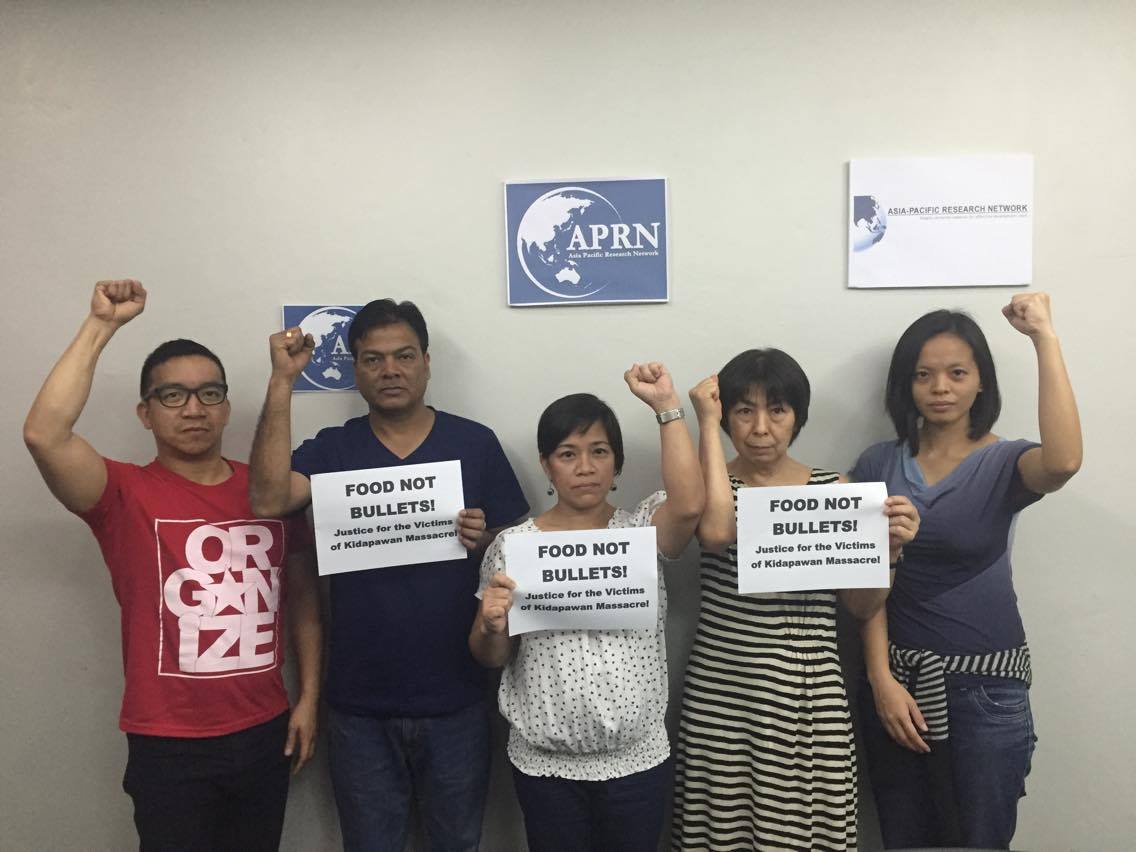 APRN statement on the violent dispersal of drought-stricken farmers in North Cotabato, Philippines

Around 6,000 farmers have been picketing the main highway in North Cotabato province on the southern island of Mindanao for three days to demand immediate government assistance to drought victims. Peasants and Lumads from Kidapawan have been suffering from the effects of climate change, as the severe drought caused by the El Nino has been destroying their food production systems since November 2015. Their suffering is further intensified by the encroachment of large-scale plantations into their agricultural lands.

Drought victims were calling for a dialogue with the local government to release the 15,000 sacks of rice that was promised to them as relief. With no food, no harvest and no fertile land to till, farmers took it to the streets to assert their rightful entitlement to food aid and assistance from the government.

At around 10AM on April 1, elements from the Philippine National Police (PNP) and the Armed Forces of the Philippines (AFP) began bombarding the barricade with a water cannon. Bursts of gunfire followed shortly as soon as the farmers stood their ground.

This violent dispersal, shooting, and continuing harassment of Kidapawan farmers comes at the heels of the Lumad killings perpetrated by the same state forces and state-backed paramilitary groups just last year. Ultimately, this new incident is a further violation to their fundamental right to peaceably assemble.

The Philippine government is one of the first to give its commitment to report the country’s progress in implementing the Agenda 2030. The Agenda 2030 includes a goal (Goal 16) which deals with efforts to create ‘peaceful and inclusive societies and access to justice.’ This apparent doublespeak – to talk about the commitment to peaceful societies while at the same time shooting hungry farmers back home – presents the fundamental problem of a global development plan that operates around the same neoliberal political and economic framework.

Moreover, the repressive strategy of using military armed forces is not new to the Philippines nor is it an isolated case – various countries in the Asia Pacific region are also suffering from intense militarism and repression perpetrated by state forces. Just three days before the Kidapawan massacre, about 700 marching farmers in Central Sulawesi, Indonesia were blocked and fired upon with rubber bullets by the police and military. In Thailand, the military junta chief just granted the army sweeping powers to arrest and detain suspects which critics fear would lead to arbitrary arrests, human rights violations and a brutal crackdown on dissenting voices.

APRN stands with our brothers and sisters in Kidapawan who as of writing are still in the refuge of the United Methodist Church (UMC). The UMC is currently being cordoned by the state’s armed forces to detain whoever tries to leave the premises. APRN calls for the immediate pullout of state forces who have been intimidating, harassing and illegally detaining protesters in Kidapawan. In the interim, immediate food aid and relief must be provided for by the government to the farmers as the quest for justice continues with the reiteration that the accountability over the Kidapawan massacre ultimately lies upon the State.

We urge our members, partners and the international community to express solidarity and support to the struggle of hungry Filipino farmers in Kidapawan and resist the growing militarism in the region.

PULL OUT STATE FORCES FROM KIDAPAWAN!