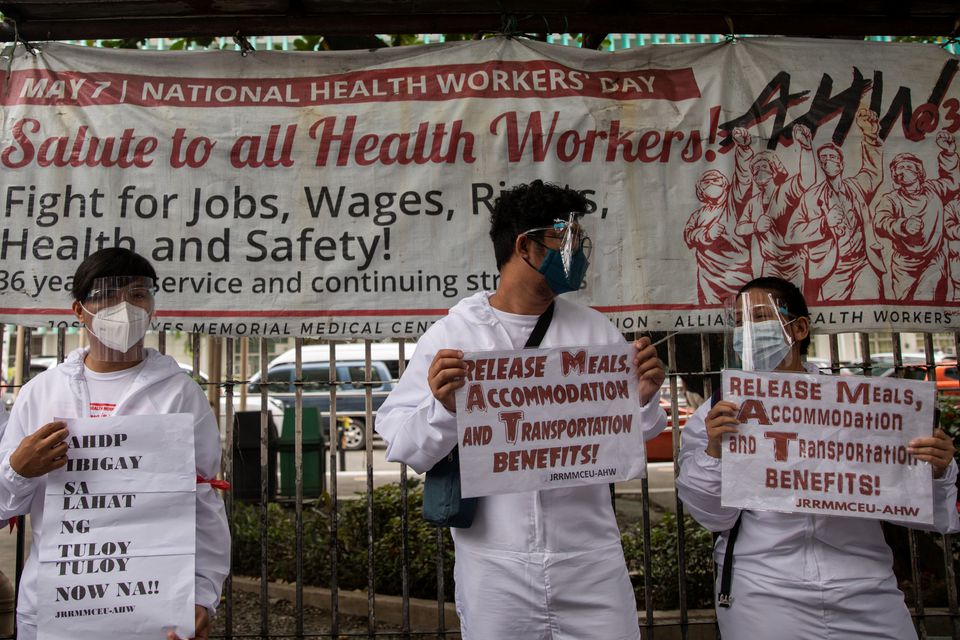 Despite their heroic efforts to save lives amidst the pandemic, health workers in Asia  remain grappling with lower wages, inhumane working conditions, and lack of material support from their governments.

The year 2021 was designated by the World Health Organization (WHO) as the “Year of Health and Care Workers” to call attention to the under-invested and fragile healthcare systems globally. WHO estimates that an additional 18 million health workers are needed by the end of 2030, primarily in the Global South. The dire shortage of healthcare workers is one of many consequences of the decades-long implementation of neoliberal policies, reflected in widespread public disinvestment and privatization of public health services.

Rather, 2021 is becoming more and more the year of health workers fighting back.   Building on widespread public sympathy and support, health workers defied state restrictions and repression, and staged protest actions to fight for higher wages and incentives, decent working conditions, and social protection.

In India, about 6,000 Asha (accredited social health activist) workers marched to demand wage increase and job regularization. Asha workers are also community health workers in rural areas that bring health care to the most in need.

In Malaysia, about 20,000 junior doctors in Covid-19 treatment facilities and hospitals staged a sit-down strike to protest government inefficiency and lack of support. According to Hartal Doktor Kontrak (HDK) or Contract Doctors’ Strike, the group leading  the action are health workers who are overworked and underpaid. They are working beyond eight (8) hours everyday without overtime pay. Labor groups also claimed that during the strike, dozens of junior doctors have resigned, citing exhaustion from work and dissatisfaction with the government’s pandemic response.

In South Korea, the Korean Health and Medical Worker’s Union (KHMWU), issued a notice of strike, demanding that the government address their need for higher wages and incentives and additional medical workforce. The KHMWU has 80,000 union members that include nurses, medical engineers, and pharmacists across the country.

While health workers in the Philippines slammed the Rodrigo Duterte government for its negligence towards the health sector and failure to pay risk allowances to health workers. They are also calling for the resignation of Duterte and his health secretary Francisco Duque III for the latter’s bumbling response to the pandemic. State auditors have recently flagged deficiencies in the government’s USD 1.3 billion health budget which was marred with irregularities and dubious transactions.

The pandemic has exposed the fragility of healthcare systems under the reign of neoliberalism. For the past decades since the end of World War II, liberalization, privatization, deregulation and denationalization have only worsened the state of economies of the less-developed and developing countries., even as they have created more opportunities for transnational corporations. The pandemic proves that these policies are intended to uphold the interest of monopoly capital and not of the people, their economy or their welfare.

The crises in healthcare and the growing discontent among health workers manifest no less than the need for a total system change. The ones in the forefronts of this global pandemic are standing up for their rights everyday. In the process, they underline the need for a system that ensures the basic needs in healthcare and effective pandemic response–a system that centers on the people.