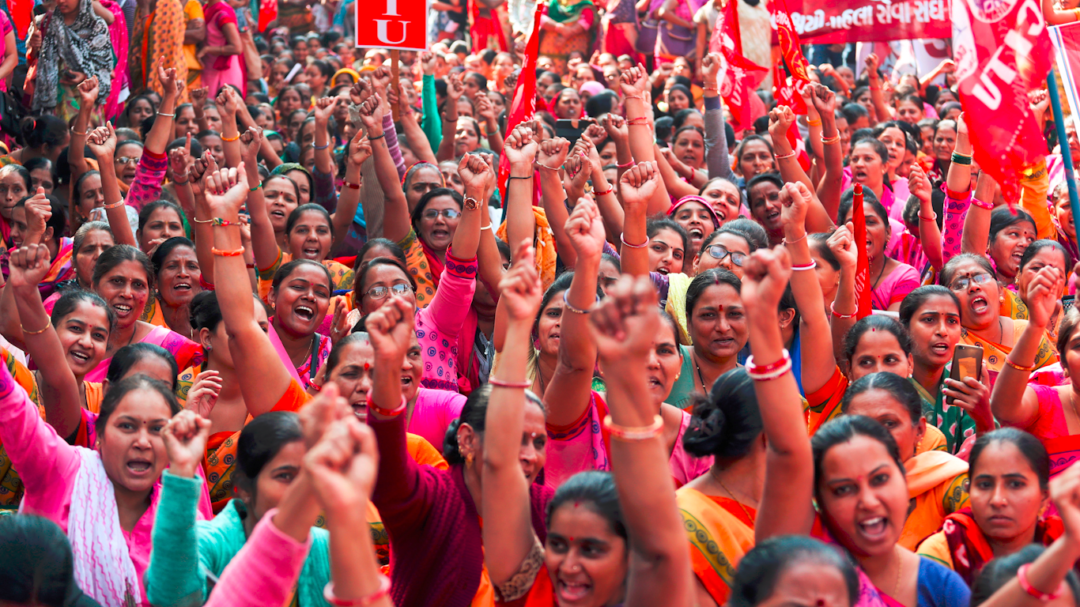 The global pandemic has caused a meltdown of the world’s economies. Millions of businesses, most of them small and medium enterprises (SMEs), were forced to close down and billions of workers were left unemployed. Many of them remain deprived of economic amelioration from their governments. Worse than these economic disruptions, however, the militarist approach has become the banner of COVID-19 response in Asia Pacific and protocols made necessary by the pandemic are being used to justify repressive measures against dissenters.

The government of India implemented drastic, ill-prepared, and military-centered actions in response to the pandemic, making the country a hotbed of coronavirus infection. Excessive use of police power in imposing movement restrictions has resulted in blatant human rights violations.

Covid-19 response has been used to justify the dispersal and arrest of Shaheen Bagh picket protestors. The said camp protest led by Muslim women was calling for the junking of the proposed anti-Muslim Citizenship Amendment Act (CAA) of 2020. Gagging the press also worsened during pandemic. According to the Rights and Risks Analysis Group (RRAG), 55 journalists have faced arrest warrants, show cause notices, physical assaults, and serious threats for criticizing government response. Four human rights defenders were also arrested in Manipur for expressing disagreement with the Narendra Modi regime’s response to the pandemic.

Pakistan’s de facto military rule has been manifesting the symptoms of totalitarian rule. On April 16, Pakistani doctors in Quetta staged a protest against State mistreatment of health workers. Over 47 doctors were detained and beaten by the military. In Bangladesh, at least 50 people have been arrested for criticizing the government’s inefficiency and negligence.

The human rights situation in the Philippines is currently in a critical state. Killings and illegal arrests of activists have persisted and worsened during ‘community quarantine.’ At least 20 victims of extrajudicial killings have been reported, including the massacre of farmers in Sorsogon province in May. Randall Echanis, prominent peasant leader and peace talks consultant, has been allegedly killed by state forces. Hundreds of activists are also facing fabricated charges related to illegal possession of firearms and explosives, making their jailing non-bailable. According to rights group Karapatan (Human Rights), a total of 426 political detainees were arrested under the Duterte administration.

These cases clearly show a trend towards authoritarianism and militarism among governments in the Asia Pacific, which is also characterized by inefficient, negligent and blatantly anti-people response to the pandemic. Governments have intensified attacks that have further shrunk civic spaces. This has brought about a suppression of the people’s right to demand for accountability.

The current pandemic has exposed fragile public healthcare systems of underdeveloped countries. Health experts in India feared that it would be impossible to curb Covid-19 because of neglected public healthcare. Indian government only spends 1.15 percent of its Gross Domestic Product (GDP) for health, the lowest among BRICS (Brazil, Russia, India, China, and South Africa). Out-of-pocket expenditure for health is 60 percent while 15.5 percent of its total budget goes to military expenses.

The pandemic has also worsened the healthcare system in Pakistan. Dubbed as one of the worst, only 0.7 percent of its GDP is allocated to healthcare. As a result, there are shortages of personal protective equipment (PPEs), medical supplies, ventilators, hospital beds, and testing kits. The underfunded public healthcare in Bangladesh also brought disastrous conditions among its people. Hospitals are incapable of accommodating all the infected patients and more than 73 percent of hospitals have no Intensive Care Unit (ICU).

For decades, neoliberal regime has totally wrecked the healthcare system around the world. Many States have privatized hospitals and eventually abandoned their responsibility to provide free healthcare for the poor. As the Regional Comprehensive Economic Partnership (RCEP) was signed by party states last November, it is feared that it will be used by pharmaceutical giants to extend its patent rights on potential Covid-19 vaccines for more than 20 years. Moreover, immunization could be inaccessible for everyone in the near future.

In line with the commemoration of International Human Rights Day, the people’s demands are: