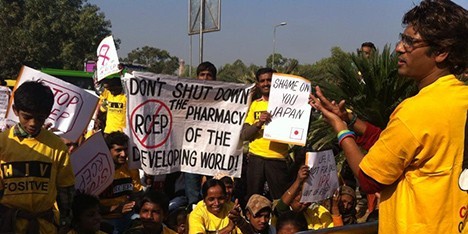 More than 80 representatives from trade unions, peasant communities, indigenous peoples, health networks, and women’s organisations met on 27-28 July in Kuala Lumpur, Malaysia to strategize around how to defeat the Regional Comprehensive Economic Partnership (RCEP) and other emerging mega-regional free trade agreements (FTAs) in the region.

The RCEP is considered one of the largest trade deals in the world covering half of the world’s population and almost 40% of the global economy. It is set to be finalized by 2017 and is currently being negotiated among 16 member states including all 10 ASEAN countries and 6 of its major trading partners (China, India, New Zealand, Australia and South Korea).

With negotiations held in secret, the little that is publicly known about the RCEP comes from recent draft texts. “While corporate lobbies are invited to advise government officials, ordinary citizens who will live with the consequences have no say whatsoever,” said Jane Kelsey, Professor of Law at the University of Auckland, New Zealand.

The leaked texts reveal that RCEP deals with more than just trade – a large portion of the agreement is designed to give rich countries and their corporations the power to delve into non-trade issues such as investment and intellectual property while diminishing the right of states to regulate in the name of public interest. “These so-called ‘investment protection measures’ in RCEP and other FTAs in the offing are already beyond mere protection of investor interests. It is increasingly becoming deliberate attacks on people’s rights and sovereignty driven by the capitalist thirst for profit and control,” said Marjorie Pamintuan, General Secretary of the Asia Pacific Research Network (APRN).

Included in the RCEP investment chapter are provisions on the notorious Investor-State Dispute Settlement (ISDS) – an investor-state arbitration system that allows corporations to sue states over actions detrimental to expected future profits. Currently, there are 696 known ISDS cases filed by corporations against 107 countries and the numbers are rapidly increasing. These cases broadly interpret investor rights to the extent that corporations can easily challenge state policies that are meant to protect public welfare, including providing a living wage, implementing agrarian reform, ensuring health and safety of the public from hazards, sound environmental policies, and so on.

The currently negotiated RCEP will impact 3.5 billion people including those in least developed countries and its most vulnerable sectors. “The RCEP favors rich countries and their corporations, not peasants and the poor. RCEP will facilitate intensified land grabbing and allow corporate monopoly control over seeds further depriving peasants and small farmers their right to land and food security,” said Rhoda Gueta of the Asian Peasant Coalition.

Based on the leaked chapter on intellectual property rights, Japan and Korea are pushing for RCEP member countries to join the UPOV 1991 (International Convention for the Protection of new Varieties of Plants). The UPOV 1991 is a set of common standards that impose rules on how countries should implement plant variety protection – a scheme that favors seed companies at the expense of farmer’s rights to seed. Another proposal aims to criminalize seed saving by imposing criminal sanctions for carrying seeds across borders without due authorization from patent rights holders.

The leaked chapter on IP also reveals that South Korea and Japan are pushing for provisions on data exclusivity and extended patent rights that would allow big pharmaceutical companies to monopolize the drug market and keep charging high prices without generic competition. This becomes a grave concern for the region especially with India being the world’s largest producer of cheap, life-saving medicines. Once RCEP is enforced, access to affordable medicines for the world’s poorest people will be seriously compromised.

During the strategy meeting, participants discussed the implications of RCEP on people’s rights as well as how it differs from other mega –FTAs such as the US-led Trans-Pacific Partnership (TPP). “ASEAN is pushing the corporate agenda through RCEP. Countries part of the TPP are using RCEP to push US-designed ‘WTO-plus’ provisions onto the remaining RCEP members which will only perpetuate inequalities,” said Joan Salvador from GABRIELA, a national alliance of women in the Philippines.

While RCEP is largely considered as a ‘subtler’ version of the TPP by providing lesser demands for liberalization, the China-led trade deal contains intellectual property provisions that are even worse than the TPP and the WTO by extending patent rights beyond domestic laws and international norms.

“The RCEP and the TPP are both extensions of the WTO framework – designed to concentrate wealth at the hands of global corporate elites,” said Beverly Longid from the International Indigenous Peoples Movement for Self-Determination and Liberation (IPMSDL). “Neither the US-led TPP nor the China-led RCEP will address the long-standing demand for an international trading system that responds to people’s needs,” she added.###