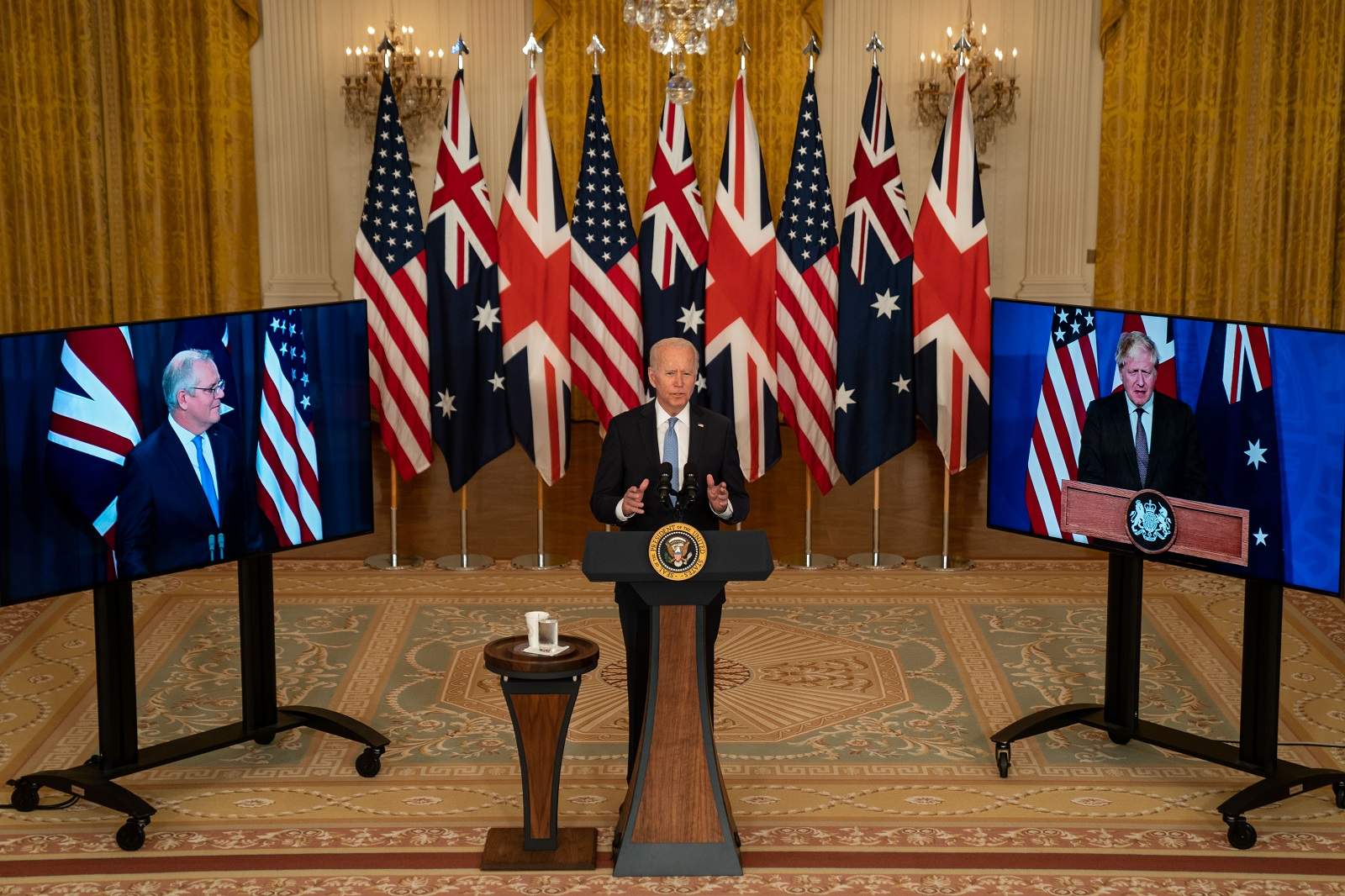 The Asia Pacific Research Network (APRN) together with the alliance of peace advocates RESIST US-led War Movement (RESIST) are sounding the alarm over US President Joe Biden’s AUKUS which could further aggravate geopolitical tensions in Asia and the Pacific. Following the tripartite deal is the last minute decision to join the Association of Southeast Asian Nations (ASEAN) Summit last Tuesday.

“Biden’s attempt to engage with the ASEAN bloc together with the destructive AUKUS deal are all part of the Indo-Pacific shift of a superpower desperate to secure its military and economic might in the region,” says APRN secretary-general Mara Medrano.

Biden took part in a virtual summit with the leaders of  Brunei, Cambodia, Indonesia, Laos, Malaysia, Myanmar, the Philippines, Singapore, Thailand, and Vietnam.  This was the first time in four years that the White House has shown interest in the regional bloc in what seems to be a push back against China.

Last September, the United States, United Kingdom, and Australia governments announced their trilateral military alliance AUKUS. According to the agreement it intends to modernize military assets to address growing “security challenges in the Indo-Pacific region.”

In a comprehensive response, research and advocacy groups with a global network for peace warned that AUKUS is a “threat to genuine security in the region” and called for its scrapping.

APRN and RESIST remarked on the motives of the deal saying that “when these countries talk about ‘peace and stability’ they only mean their manifest destiny.” They also added that historically these superpowers have been using their “military might to influence world affairs to their favor.”

The security pact intends to develop cyber capabilities, artificial intelligence, quantum technologies, and other arms technologies. The statement cites one of the controversial initiatives under AUKUS wherein Australia will be acquiring at least eight nuclear-powered submarines through BAE Systems PLc.

“In effect, this has officially transitioned Australia from being a military launchpad to an active major actor in the geopolitical disputes of the region,” says Medrano of the network APRN which co-signed the statement.

“[This] runs the risk of leaking nuclear materials in the Pacific that would thoroughly damage ecosystems and biodiversity,” says APRN and RESIST adding that “[t]he mere existence of these submarines could invite other countries to explore nuclear capabilities in modern warfare, catalyzing a nuclear arms race.”

In the event of a war and nuclear catastrophe those “further at risk are communities hard hit by the climate crisis” according to Medrano. It was underscored that more than half of those in the top 15 most at risk countries are from Asia and the Pacific. Countries like Vanuatu, Fiji, Tonga, Solomon Islands, Brunei, Papua New Guinea, Bangladesh and Philippines are already facing extreme natural disasters resulting in massive forced migration and displacement.

The security pact intends to develop cyber capabilities, artificial intelligence, quantum technologies, and other arms technologies. The statement cites one of the controversial initiatives under AUKUS wherein Australia will be acquiring at least eight nuclear-powered submarines through BAE Systems PLc.

APRN and RESIST made it clear that these are but enhancements of US, UK and Australia’s hundreds of already existing military bases and systems in the region. The groups underlined that what fuels the tripartite alliance is precisely their interest in securing economic dominance and trade route control over Asia and the Pacific.

“The AUKUS countries would greatly benefit from securing the key supply lines away from global competitors like China,” says Medrano. According to the joint statement, this meant “siphoning the Global South’s natural resources, and further penetrating domestic markets of weak democracies where they can dump their surplus goods.”

The Straits of Malacca was cited as one of the essential waterways in global trade wherein a quarter of the world’s trade and half of the oil supply pass through. In particular, 70 percent of Japan’s oil and 80 percent of China’s trade traverses the Malacca Straits.

“And, anyone who can monopolize control over the waterway could dictate the flow of global commerce and use it to leverage further influence over rival countries,” says APRN and RESIST.

The claims of China over maritime territories in the ASEAN bloc such as Taiwan, Vietnam, Philippines, Malaysia, Brunei keep the situation volatile. According to the statement, China’s construction of military bases in the region has been a “continuing existential threat to the US-led military dominance of the Indo-Pacific” with AUKUS aimed at “containing China’s territorial expansion.”

Lastly, research NGOs, peace advocates and movements are demanding that China, US, and other superpowers respect national sovereignty and patrimony of all nation-states. “If they are truly sincere in ensuring regional peace and stability, then they must withdraw their military troops, nuclear arms, and bases from the Global South,” APRN and RESIST end.#