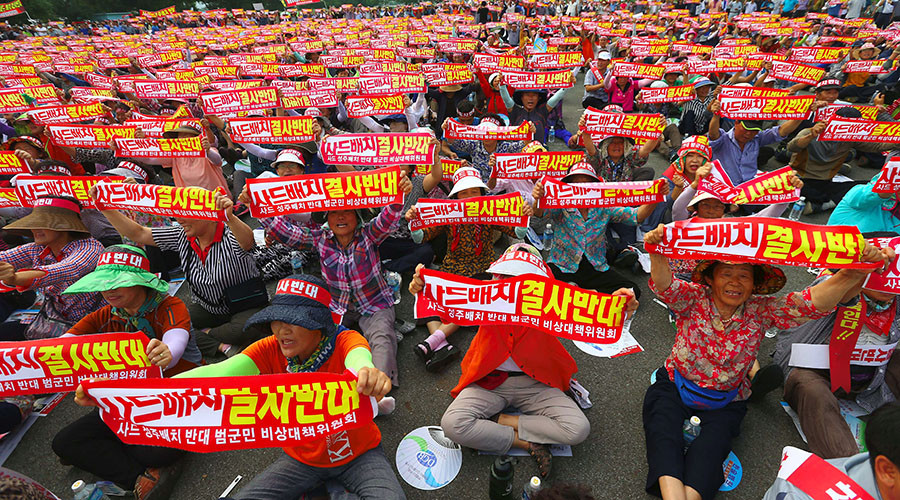 The THAAD is an anti-ballistic missile system supposedly intended to be a defensive measure against long-range ballistic missiles. The THAAD system was designed and developed by Lockheed Martin Space Systems and other industry players such as Raytheon under a 689 million USD defense contract with the US Army in 1992. It was in 2008 that the US Army in Fort Bliss, Texas activated the first THAAD battery unit. There are currently six (6) active THAAD batteries stationed in the US, Hawaii, and Guam. In 2011, Lockheed Martin received a 1.96 billion USD contract to produce two THAAD weapons systems for the US Missile Defense Agency and the United Arab Emirates. Qatar has already entered into talks with the defense company to install the missile defense system in its soils under a 6 billion USD sales contract.

In a 2010 report, the US government unveiled its new strategic defense architecture that relies on a globally distributed surveillance and communications systems including THAAD deployments which can be altered to gather ballistics intelligence if placed in strategic locations of interest . Since the US’ withdrawal from the Anti-Ballistic Missile (ABM) Treaty in 2002, it has been conducting massive deployments of missile defense systems to encircle Russia and China. The recent decision to deploy THAAD in South Korea is a key component of the US Pivot to Asia. While making public announcements that the missile defense system to be built in South Korea is intended to prevent attacks from Pyongyang, the real target is to launch a global ballistics defense network that can foil China and Russia’s deterrence capabilities while employing the US military’s first-strike strategy against North Korea . The deployment of the THAAD in South Korea complements the other military activities made by the US to secure its Pivot in the region, which include military exercises with South Korea and other Asia Pacific countries, as well as strengthening defense treaties to build new bases Japan and in the Philippines.

The decision sparked protests from residents across the country citing fears over their health and safety, the inevitable increase of US military presence, and the THAAD system becoming a wartime target should South Korea’s adversaries choose to strike. More than 5000 farmers gathered in Seongju County staged protestes defend their lands against the proposed missile defense system.

Earlier in July, two Korean-American activists were denied entry into South Korea because of their plans to join the protests. Last August 15, more than 900 South Koreans publicly shaved their heads as part of a series of anti-missiles protests in opposition to the deployment of the THAAD on their land . Residents voiced concerns on the probable rise of cancer incidence due to prolonged exposures to high-frequency waves produced by the system’s radar. Aside from the health concerns and possible land grabbing, protesters also lamented the democratic deficit in the decision-making on the installation of the THAAD. According to them, no prior consultations were made with the residents and local government.

The deployment of the THAAD in South Korea further fuels the increasing militarism in the Asia Pacific, and pushes the region into a costly and dangerous arms race placing the people at the center of conflict, displacing entire communities, and violating people’s rights in the process. We call on peoples organizations and civil society in the region to unite in exposing and opposing these US-sponsored military actions as part of its dependence on endless wars of aggression in its bid to salvage itself from economic decline and maintain its hegemonic grip in Asia Pacific.###