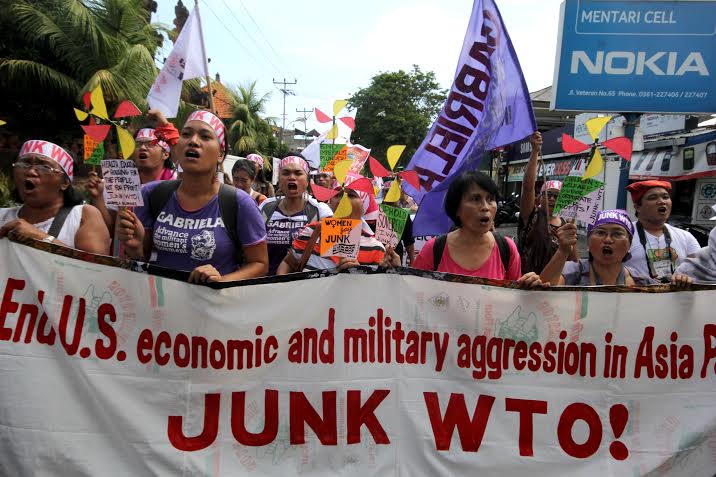 The Asia Pacific Research Network (APRN) celebrated its 15th year of doing research for and with the people’s movements through a series of activities at the People’s Global Camp (PGC) against the World Trade Organization in Bali, Indonesia. The PGC is a counterpoint to the WTO MC9 which ran from December 3 to 7.

On December 4, the network conducted the Public Forum on the People’s Trade Agenda wherein CSOs explored alternative frameworks to neoliberal trade such as Development Justice and the Bandung Principles as well as the already operating alternatives such as Fair Trade and the Bolivarian Alternative for the Latin Americas (ALBA). Kate Lappin of the Asia Pacific Women in Law and Development (APWLD) discussed the five foundational shifts of Development Justice, which are: (a) redistributive justice; (b) economic justice; (c) social justice; (d) environmental justice, and; (e) accountability to peoples. As an alternative development framework, Development Justice envisions a new trade and financial architecture that will ensure that poor countries own their development strategies and meet their needs. Sonny Africa of IBON Foundation elaborated on the Bandung Principles of 1955 and their relevance to the current struggles for alternatives to neoliberal trade. Africa highlighted the Bandung’s emphasis on the decolonization of developing countries and south-south cooperation as processes that will ensure that economic development of poor countries. Patricia Ranald of Australia Fair Trade and Investment Network (AFTINET) elaborated on the principles of people to people Fair Trade and the ALBA as among the existing and operational systems that apply the principles of fair trade at the international level.

Speakers from different sectors voiced out the impacts of WTO and trade liberalization and what their sectors need in terms of alternatives. Ujjaini Halim from Institute for Motivating Self- Employment (IMSE) stressed the need to follow the principles of food sovereignty to stop the stop export dumping, land grabbing, the loss of local varieties of seeds, and other negatives impacts of the Agreement on Agriculture (AoA). Joselito Natividad of Asia Pacific Mission for Migrants (APMM) called for providing domestic jobs and ensure the rights of workers, both local and migrant, to humane working conditions, just wages, freedom of organization, collective actions, gender justice and universal social protection. Shiela Singh of ANWAR specified that genuine land reform must be implemented to empower rural women and help them fight against structural oppression and the evils of trade liberalization. Adam Wolfenden of Pacific Network on Globalization (PANG)commented that for the Pacific, neoliberal globalization is actually the alternative because local communities have been practicing sustainable forms of local economies before their introduction to the global market. Sarah Dekdeken of the Indigenous People’s Movement for Self Determination and Liberation (IPMSDL) pointed out that like the Pacific peoples, indigenous peoples in different countries have been practicing sustainable local economies before their territories went up for sale because of investment and trade liberalization. Kavaljit Singh of Public Interest Research Center (PIRC) elaborated on benefits of a banking system that are restrictive towards foreign banks, a system applied by India which helped insulate it from financial shocks. Singh also gave a warning not to entrust a country’s development strategies to fair weather friends like foreign banks who close shop when it is not profitable for them, but go back when the economy is good. At the end of the public forum, the draft statement prepared by the secretariat was revised and circulated to different networks. (See Statement of the APRN Public Forum on People’s Trade Agenda).

The network celebrated its 15th year anniversary by hosting a simple dinner attended by both new and old members, partners, and allies.

Former Board of Convenors (BOC) chairperson Antonio Tujan Jr. provided a history of the network, from its roots in the struggles against Multilateral Agreement on Investment (MAI), to being a list serve before developing into a full grown network supporting people’s struggles through research, advocacy and training. Jane Kelsey, a former BOC member, also shared her memories of APRN and lauded the new generation of members as the new unsung heroes that continue to give life to the network. Tyler Dale Hauger of The Karibu Foundation, one of APRN’s longest partners, was present at the dinner and congratulated APRN on its 15th year anniversary. APRN’s latest publication, WTO and Maldevelopment, was launched during the anniversary dinner. Bonnie Setiawan, one of the authors and also a former BOC member, was present at the event wherein he received the complimentary copies of the book and gave a short speech of how he developed his research. He also congratulated the network for its anniversary. To close the event, Maria Theresa Lauron, the current BOC chairperson of the APRN, gave a parting message that ensured APRN will strengthen its research, advocacy and training in its efforts to strive greater heights in supporting people’s movements.

APRN put up two photo exhibits on display at the PGC. Titled APRN Through the Years, the photo exhibit showed how APRN developed from a mere list serve to a network actively engaging people’s issues for the past 15 years. The other photo exhibit, featured Orin Langelle’s photos on People’s Struggles Against WTO and the Neoliberal Globalization. Orin Langelle is a photojournalist and the Director of Langelle Photography. He is involved in different movements for social justice including the opposition to the Vietnam War in the 1960’s. APRN members and allies also joined the opening march of the PGC and the peoples march against WTO to express solidarity with the people’s struggles against WTO and neoliberal globalization.