Asia Pacific Research Network co-organized several fora and workshops with members and partner organizations at the World Social Forum in Tunis on March 24-28. The themes of these activities are in line with the research thrust that APRN members identified during the General Council meeting last year (Militarization and Wars, Post-2015 Agenda, Asia Integration, Corporatization/Corporate accountability and Trade and Development). The network is also co-organizer of the workshops Unpacking the SDGs and Accountability to Peoples. However, due to unforeseen challenges, the events were regrettably cancelled.

Forum on Militarism and Democracy

The forum on Militarism and Democracy tackled the rising militarism and how it impacts democracy and human rights in the African Continent, West Asia and North Africa, and Asia Pacific.

Ms. Corinna Mullin from the University of Tunis explored how the US War on Terror has been used to beef up the US security forces around the world and why the endless war is actually profitable for the military industrial complex. Mr. Ammal Djeffal of the Arab NGO Network for Development identified the dimensions of terrorism and its links to militarization in the Arab Region. Ms. Maisan Hamdan of Al Marsad shared on how the ethnic Druze in Palestine are forced to be drafted in the military to serve the Israeli occupation forces. Ms. Hamdan is currently leading a campaign called Refuse — Your People Will Protect You which aims to provide legal and financial support to Druze youths objecting army service so that they have alternatives to the state and private benefits bestowed by Israel upon being drafted to the military. Mr. Demba Moussa Dembele of the Africa Forum for Alternatives, a member of the International League of People’s Struggles, criticized the US efforts to militarize Africa through its project known as Africa Command (AFRICOM). Under the pretext of fighting against “terrorism and how NATO forces are also using terrorism in the Sahel Region as pretext to intervene in Mali, Niger, and the Central African Republic. Ms. Marjorie Pamintuan of Asia Pacific Research Network expounded on the various aspects of the US Pivot to Asia Pacific and the resulting militarism in the region. 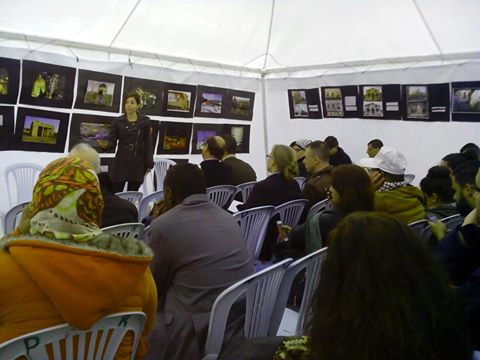 During the open forum, it was pointed out that the word ‘terrorism’ should be used with care and the real terrorists, who use state force and military power to impose their will should be properly identified. It was also raised in the open forum that even though the struggle against militarism is a long journey, people’s resistances are alive and thriving in every region and different organizations are jointly providing fora wherein struggles against militarism and other issues violating the rights of the people are discussed and strengthened. An example is the International Festival of People’s Rights and Struggles (IFPRS), which is an organized space that aims to draw lessons from and celebrate the victories of people’s struggles to claim and assert their rights. The IFPRS, which was first held in 2011, will once again be held on November 2015 in Manila, Philippines parallel to the APEC meeting that will also happen in Manila.

Is capitalism compatible with the fight against climate change? Case studies of Philippines and Cuba

In this forum, speakers exposed why capitalism is not at all compatible with the fight against climate change. Ms. Alexandra Fouarge of Médecine pour le Tiers Monde shared on how capitalism as the dominant economic system continues its destructive mode of production and consumption which makes climate change worse and threatens the lives of communities especially in the global south. To show concrete examples of how capitalism destroys the people and planet, Ms. Marjorie Pamintuan of APRN presented the case of how mining in the Philippines worsens climate change and impacts communities. Ms. Liza Lebrun of COMAC shared on her experience in Cuba wherein the government implements various policies not only to mitigate the island-nation’s carbon emissions but also prioritizes policies that help people adapt to the changing climate. According to data she presented, Cuba is among the countries with the highest standard of living and yet among with the lowest carbon footprint in the world. Mr. Paul Quintos of IBON International expounded on the multiple crises of global capitalism and the fight for system change. According to Mr.Quintos, climate change cannot be resolved without fundamentally changing the system. In working towards system change, there is a need to organize and mobilize frontline communities, grassroots organizations and climate activists for a Global People’s Surge. The Global People’s Surge (GPS) as a campaign platform will put forward the perspectives, initiatives, and the struggle for climate justice and social change of grassroots movements, especially of those who are in the frontlines of climate change. It will engage in fighting for climate justice in all arenas and levels (not just engaging the COPs), expose and oppose corporate capture of the climate and false solutions, and articulate a Peoples Protocol on Climate Change. This workshop explored how the global trade system under the WTO and other FTAs impact communities and affect the accomplishment of seemingly laudable SDGs. Speakers from Africa—Mr. Sylvester Bagooro of TWN-Africa and Mr. Justus Lavi of Kenya Small Scale Farmers Forum—shared on how the WTO and other trade deals impoverish local farmers and destroys the local agricultural industry. Mr. Biraj Patnaik of the Right to Food Movement talked about the need for changes in the trading system which currently wrecks havoc on the food security of developing countries, LDCs, and even emerging economies like India. Ms. Marjorie Pamintuan of APRN exposed how the TPPA as an example of a 21st century trade deal will worsen the impacts of the WTO and will prevent countries to achieve sustainable development. Mr. Arjun Karki from LDC Watch echoed the same sentiments on how trade is very important for LDCs in achieving the SDGs and yet, they are often at the losing end of trade deals. Calls for people’s mobilization against FTAs and the WTO were repeatedly made throughout the workshop. People’s movements and NGOs both in and out of Africa are already strategizing their inside and outside engagements for the upcoming WTO Ministerial in Nairobi on December 2015.###